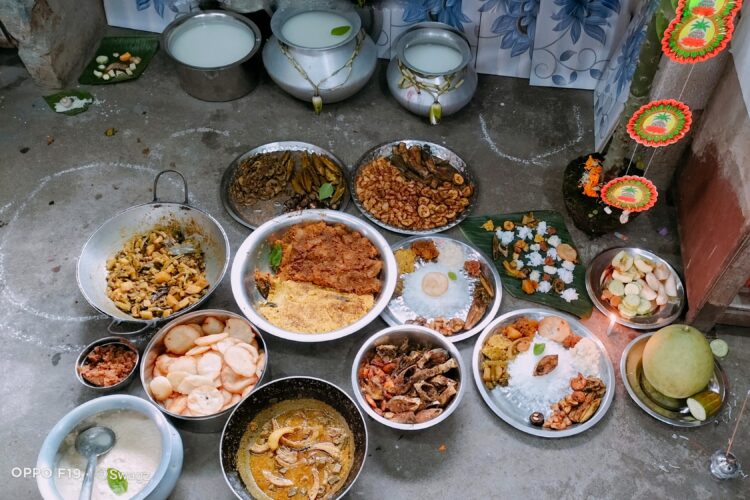 A piece of music is immense powerful than science, it can transmit to you at any time zone without a time machine. And there Bengal’s own folk songs are like Pied Piper of Hamelin (হ্যামিলিনের বাঁশিয়ালা), who has the power of a magician to create an old brownish vintage landscape of Bengal suddenly, in front of your eyes. And it may look as simple as the writing of Aban Thakur (Abanindranath Tagore), as colourful as Jamini Ray’s paintings or as nostalgic as your first reading of Sahaj Path. Suddenly you will feel a humming sound that has been trying to pamper your earholes. First, you couldn’t understand those lines but you will feel hypnotised. And then you feel the chorus is slowly coming towards you. At once, when you open your eyes, you found yourself beside a small pond in an unknown village in Bengal. As far as your eye can see just green and green like a description of Rupasi Bangla. Suddenly you found yourself in the month of ‘Shravan(August)’ and that humming sound is a chorus of Manasa Panchali which is sung by some village women who came there to participate in an old Bengali ritual called Manasa Bhasan.

After a long monotonous monsoon, when you suddenly find some white cotton ball clouds playing like small children in the garden of the black giant sky, that means in the Bengali calendar Bhadra(September) arrives. And Bengalis are already started counting for ‘Durga Puja’. Actually, the warm-up match starts from ‘Biswakarma Puja’, the official end of Bhadra. But we, Bengalis love to live with each other. So to see us Biswakarma shares his day with ‘Manasa’. And that created Bengal’s own traditional folk festival – “Ranna Pujo”. It’s basically a cooking festival, where interestingly cooking is done in Bhadra and that food is eaten in Ashwin. Since childhood, I was very disappointed because why this event wouldn’t have occurred place at my home. Now at this age, I can understand the festival has much other significance than cooking, making it our folk culture because it’s related to your lifestyle.

The preparation begins almost a month before the festival. The preparation is nothing but cleaning up the entire household. Starting from bedding to all the washable items in the house are washed and dried in sun. The floors of the house, doors and windows all are scrubbed and cleaned too. And all are going on throughout the entire month. It’s a part of preparation.

Who says, science belongs to only books and institutes? Behind all our customs and rituals science is sitting like a monk. Here the scientific reason behind this festival is quite interesting. This festival is generally surrounded by the Folk Goddess Manasa ( মনসা বুড়ি ), who is a Goddess of snakes in Bengali mythology. And during monsoons especially in villages, this festival is usually celebrated by villagers. This time ponds get over-flooded and incidents of snakes entering houses are very often. Since most of these household kitchens have stoves or ovens made of mud. And snakes find those stoves ideal for hiding. Cleaning the whole house including the kitchen ensures that the house is free of snakes, rats and other animals. As the kitchens are always operational in most households, and the most likely places for snakes and rats, cleaning up the kitchen thoroughly ensures that hygiene is maintained.

No no no! This is not eating time. I know like me, you are also a responsible person. And like all of us, one of your primary duties in any invitation house is to recover your gift’s money on the food table. Wait for a little, we are almost on there, just the puja part is remaining. Now it’s all about to end of the cleaning process. The day before the puja, every article in the kitchen is removed and the kitchen is cleaned thoroughly. All utensils are cleaned before this puja. After taking a bath, the elderly woman in the family starts preparing for puja in front of the oven and by playing the ‘shank’ the gigantic preparation begins. And the process ends in also the same manner.

Now I am going to share some exciting facts about these rituals. Maybe you should notice, the festival doesn’t perform in all houses. Because it has a generation base tradition. The eldest woman of the family who is performing the tradition right now, got this from her older one, maybe from her mother, mother-in-law etc and the next generation will get it when she hands it over. And if any house wants to perform this ritual, those don’t have this, then they need to get this from whom, who has the permission to perform this custom. She will come and first light the fire in the oven, this way the custom passes from one to another. On the other hand, there is also a custom that you can’t decrease your menu after a year, may you keep it static or increase it. But one story I heard about this festival and I don’t know how much this fact is true. People say that if any family those are participating in the custom, see a snake during the puja or cooking time on that particular day, then this is an evil indication and that particular family couldn’t continue their custom from that day for a lifetime.

If Gujraties has their thali then we Bengali’s have our Ranna Pujo items. Here preparation of food is not smaller than a war. The entire process starts almost from the afternoon and goes on till midnight. All the members of the house take part in this huge celebration and play their own role in the kitchen. This festival is nothing but a reunion of family members and their stories in the kitchen. Now keep ready with your pen and paper and gets into the menu part-

And all are served as a thali form –

On the day of the puja, Seven leaves from the Shapla flower is used to serve the bhog including all the items for the Osthonag deity (Manasa tree’s branch is used as the Oshtonag diety).

Once the puja and the rituals are completed food is served. Bengalis believe that if the Ranna puja is done well, Ma Manasa (Snake goddess) will be pleased with them and snakes will not cause any harm.

No comments to show.